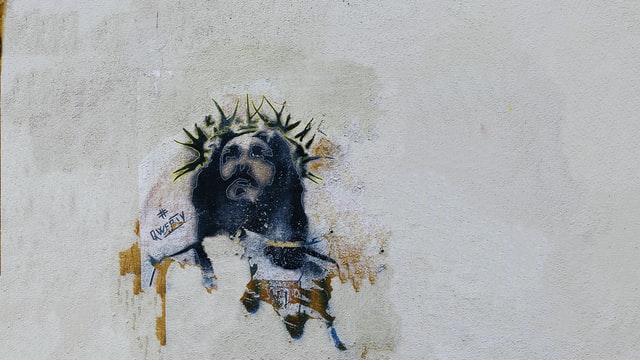 This article deals with another apparent contradiction regarding the location of Jesus Christ’s soul (or spirit) while his body was in the grave.  First, it should be noted that Muslim objections to Christ’s crucifixion and death originates with the Qur’an’s claim that Jesus Christ was neither crucified nor died upon a Roman cross.  Thus, the origin of the objection does not begin with the historical evidence for Christ’s crucifixion.  Rather, the objection begins by assuming the truth of the Qur’anic statements.  Of course, when a text is assumed to be true, all contrary historical evidence is automatically rejected.  Thus, Muslims are motivated by their presuppositions to discredit all the historical evidence for Christ’s crucifixion and death.  Because, if Jesus Christ were crucified, then the Muhammad’s Qur’an is factually and historically in error.

In some ways, Muhammad’s error is not surprising, because the Arabian Peninsula was not an area where historical scholarship flourished during his time.  The merchant traders were familiar with the stories, legends, myths, superstitions, and oral traditions of the peoples of the desert, more than they were familiar with the historical documents.  Their legends were an important part of their Arabian culture, because they instilled their traditional values and a sense of community among the Arabian hearers.

This article answers an apparent contradiction in the New Testament.  On the surface, it appears that, while Jesus Christ was dead, Jesus’ soul was simultaneously in hell and in paradise.  Hell is a place of fiery torment and pain, but paradise is a place of delight and blessing.  Thus, it does not seem possible that Christ’s soul could be in both places simultaneously.  Therefore, there seems to be contradiction in the location of Jesus Christ’s soul while his dead body was in the tomb.  The verses for the basis of the contradiction follow,

Therefore being a prophet, and knowing that God had sworn with an oath to him, that of the fruit of his loins, according to the flesh, he would raise up Christ to sit on his throne;  He seeing this before spake of the resurrection of Christ, that his soul was not left in hell, neither his flesh did see corruption.  This Jesus hath God raised up, whereof we all are witnesses.  Acts 2:30-32 (KJV)

And he said unto Jesus, Lord, remember me when thou comest into thy kingdom.  And Jesus said unto him, Verily I say unto thee, To day shalt thou be with me in paradise.  And it was about the sixth hour, and there was a darkness over all the earth until the ninth hour. Luke 23:42-44 (KJV)

The answer to this apparent contradiction arises because the English word, hell, should be translated more accurately, Hades. There are three Greek words (gehenna, tartarus, and hades) that are all translated  ‘hell’ in the English King James Version (KJV).

Gehenna is the Greek word that most properly and most commonly designates hell in the New Testament. This is the hell where the damned are assigned after the final resurrection and the last judgment.  Gehenna refers to the hell of fiery flames of eternal punishment.  The valley of Ge-Hinnom was next to the ancient city of Jerusalem.  This valley was where the city’s trash and refuse was burned.  The city’s inhabitants could always see smoke and fire arising from the burning trash in the valley. Thus, the valley’s name became a term to designate the hell of fire and torments.  However, the Greek word, Gehenna, is not the Greek word found in Acts 2:31.  An example of a verse that uses the Greek term, Gehenna, for the fiery hell is found in Mark 9:43.

If your hand causes you to sin, cut it off. It is better for you to enter life maimed than with two hands to go into hell (Geennan), where the fire never goes out.  Mark 9:43 (NIV)

Strong’s Dictionary, geena (gheh’-en-nah); of Hebrew origin [1516 and 2011]; valley of (the son of) Hinnom; ge-henna (or Ge-Hinnom), a valley of Jerusalem, used (figuratively) as a name for the place (or state) of everlasting punishment:

Tartarus is another Greek word that is translated hell in the KJV Bible.  This word occurs just once in the Greek New Testament.  It refers to the abyss and the chains of darkness.  The only place the word occurs is in 2 Peter 2:4.  This word for hell is not the one found in Acts 2:31.

For if God spared not the angels that sinned, but cast them down to hell, and delivered them into chains of darkness, to be reserved unto judgment;  2 Pet 2:4 (KJV)

Strong’s Dictionary, tartaroo (tar-tar-o’-o); from Tartaros (the deepest abyss of Hades); to incarcerate in eternal torment:

Hades is a state or condition of a soul or spirit after the body’s death. Hades is not hell, as we commonly think of hell.  It is a temporary condition of the departed spirits that lasts until final resurrection and the Day of Judgment.  Both the believer’s departed soul and the unbeliever’s departed soul are in Hades until the time of the resurrection of the body.  Some scholars think that the term, Hades, etymologically means, “the unseen,” while others believe it is derived from a word meaning, “all-receiving.”  The grave receives the body, while Hades, the Unseen, receives all the departed souls or spirits.

Strong’s Dictionary, haides (hah’-dace); from 1 (as negative particle) and 1492; properly, unseen, i.e. “Hades” or the place (state) of departed souls:

Thus, all the departed souls are in Hades. Those who are redeemed enjoy the loving presence of Allah.  This is a place of bliss, and it is sometimes called, the bosom of Abraham (Luke 16). Those who are unbelievers are in Hades too. However, there place is sometimes called a prison (1 Peter 3:19).  This is where unbelievers await the last resurrection and their final damnation to hell (Gehenna).

Never does the New Testament record that Christ went to Gehenna or Tartarus after he died.  His blessed spirit was in Hades, the place of all departed souls.  Furthermore, it was his body that did not see corruption, because a spirit never undergoes physical decay.  The New King James (NKJ) version properly translates Acts 2:27 with the word Hades instead of the incorrect word, hell.

“For You will not leave my soul in Hades, nor will You allow Your Holy One to see corruption.” Acts 2:27 (NKJ)

So, Acts 2:27 claims that Christ’s soul was not left as a departed spirit in Hades nor was his body allowed to experience corruption.  Acts 2:27 has nothing to do with Christ going to the fiery caverns Hell and being with the devil and his infernal demons.  It simply means that Christ’s soul (spirit) was not left disembodied.  His soul revivified his body in the event of the resurrection.  His body was miraculously preserved, and it did not corrupt the short time it was in the grave before its resurrection.

So, Christ going to Paradise is perfectly compatible with the state of his departed spirit (Hades).  Hades simply refers to the condition, or the state, of a spirit separated from its body.  All departed souls are in Hades too.  While the lost souls are tormented by their condition of lostness, the redeemed are blest in the paradise of God. It is only after the last resurrection that the lost are actually cast into Gehenna.  The redeemed are resurrected to enter bodily the abode of heaven.

The Apostle Paul viewed bodily death as a gain, because his bodily death would result in his spirit being brought into the enjoyed presence of Christ. Thus, while his body was dead, his soul would be in Hades enjoying the pleasures of Christ’s blest presence.

“For to me, to live is Christ and to die is gain. If I am to go on living in the body, this will mean fruitful labor for me. Yet what shall I choose? I do not know! I am torn between the two: I desire to depart and be with Christ, which is better by far; but it is more necessary for you that I remain in the body.” Phil 1:21-24 (NIV)

In conclusion, Jesus’ soul never went to hell.  His spirit went to Hades where all of the departed believers’ spirit go to enjoy blessed presence of Allah.  This state or place is called paradise for the redeemed.  Christ’s soul did not remain in Hades.  His body became re-animated by his soul at his resurrection.  Forty days after his resurrection, he was raised to heavenly glory (Acts 1:9).

On the final day of Judgment, death (the grave will yield up the bodies) and Hades (the place of the departed spirits) will all be emptied. The bodies will be rejoined with their human souls before the final judgment.  After the final day of judgment, death and Hades will end their existence by being cast into “the lake of fire.”  This Lake of Fire is the fiery hell (Gehenna) that is mentioned a number of times in the New Testament scriptures.  So, these verses clearly distinguish between Hades (the abode of departed spirits) and Hell (the Lake of Fire).   Hades is a temporary condition for the departed souls while Hell is the eternal abode of the unbeliever.  Hades will no longer exist after the final day of judgment.

And I saw the dead, great and small, standing before the throne, and books were opened. Another book was opened, which is the book of life. The dead were judged according to what they had done as recorded in the books.  The sea gave up the dead that were in it, and death and Hades gave up the dead that were in them, and each person was judged according to what he had done.  Then death and Hades were thrown into the lake of fire. The lake of fire is the second death. Rev 20:12-14 (NIV)