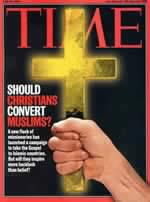 is the headline for the June 30th issue of Time magazine,1 a popular publication with an international readership. In the feature article, the author, David van Beima, presents fairly the issues surrounding Christian evangelism in Muslim countries. He used pseudonyms appropriately to protect the safety of missionaries who work in these potentially hostile environments. Although the Time’s article emphasized the issue of Western missionaries, local indigenous Christians face religious discrimination from their own governments even though they are native-born citizens. So, the issue isn’t just Western missionaries entering an Islamic country. It is the inherently intolerant nature of an Islamic state towards non-Muslim peoples whether they be citizens or foreign-born.

As the article notes, Christians are not united in the best manner to present the gospel of Jesus in lands with an Islamic government. In some countries, it is illegal to present the message of Jesus to Muslims, and Muslim who convert may face persecution, imprisonment, and even death as demanded by Shari’a law. In some cases there are no easy answers to what are the most appropriate methods of evangelism, and there is an on-going debate within the Christian community on permissible methods of evangelism in nations that restrict an individual’s right to religious freedom.

These issues of religious freedom aren’t obstacles in enlightened nations that recognize an individual’s right to religious freedom. But, Islam is ancient theocratic system where the state is govern by the Qur’an and the Sunnah of Muhammad. These sources of jurisprudence restrict an individual’s intellectual and religious freedom and favor Muslims over the non-Muslims. If Islamic nations actually supported human rights and equality, then there would be no issue to discuss. Christians would be able to propagate their religious beliefs on an equal footing with Muslims without fear of physical harm or governmental interference.

The problematic misconception that Westerners have regarding Islam is that they believe Islam is merely a religion in competition with other religions, such as Baha’ism, Christianity, Hinduism, Judaism, Taoism, etc. In reality, Islam is more than a religion. It is a social, economic, and legal system too. Because Islam is a legal-religious system that regulates commerce, society, government, and religious activity, its judicial system conflicts with the basic human rights of non-Muslims. In fact, Islamic Shari’a scholars view religious proselytizing and conversion to a non-Islamic religion as a crime of treason worthy of death. The Time’s article notes the link between state and mosque and that Shari’a law calls for the death penalty of those who convert from Islam.

But in societies in which state and mosque are closely intertwined, in which defamation of Islam is a crime and conversion out of it can invited vigilante violence … ? p. 39.

Of the three Abrahamic faiths, Islam is the most ferociously opposed to the straying of its flock. Shari’a law calls for the death penalty for those who convert to other religions, and although the penalty is not binding in most Muslim-majority states, persecution is common. ? p. 40.

“Sam,” 46, recalls the day Israeli soldiers spotted his white Citroen van on the shoulder of a back road outside the West Bank town of Nablus and, hearing the murmuring behind its closed curtains, concluded they had stumbled on a nest of suicide bombers. At gunpoint, the American exited his vehicle and explained that the six Palestinians with him were a clandestine Christian Bible-study group avoiding the prying eyes of their neighbors. “They are in danger;” he told the baffled soldiers ?”in danger of being killed:’ Sam claims to have led more than 100 Palestinians to Christ but says that it is they who are heroic, not he. Some of the converts, say their co-believers and local diplomats, paid for their faith with arrests, beatings and torture at the hands of Palestinian forces. The same sources report that one man was then turned over to Fatah militiamen, who killed him. ? p. 43.

By contrast, Muslim missionaries in the West enjoy legal and governmental protection to engage openly in their numerous evangelistic campaigns to win converts to Islam. Saudi Arabia funds the construction of mosques and Wahhabi madrassas world-wide while, at the same time, forbidding the construction of any non-Muslim place of worship within its own territory. It is a crime to distribute the printed text of the gospel of Jesus Christ within its national borders.

Islam’s intolerance towards non-Muslims creates a severe challenge for Christians to practice and propagate the message of Jesus. The words of Jesus, “Therefore go and make disciples of all nations,” Matthew 28:19 (NIV) are nearly impossible to obey, where Islamic ideology is enforced in a Muslim nation. Should Christians preach boldly the gospel and face potential death? Should they pretend to be ‘Jesus Muslims’ to be more acceptable? Should they engage only in providing food for Muslim refugees? Is a ‘contextualized’ approach better? Or, should Christians become ‘tent-makers’ in Muslim lands as a method to fulfill Jesus’ gospel commission?

All of these questions are questions of methodology on how best to loosen Islam’s grip of religious intolerance, and they arise because Islamic apostasy laws reject the notion that each person has the basic human right to choose freely his or her own religious belief. Intellectual light and liberty are feared by Islam, so its laws are inherently unjust and inequitable. As an example of injustice, an Islamic government finds it laudable when a non-Muslim becomes a Muslim, but it considered it a crime against the state if a Muslim were to become a non-Muslim. This injustice shows the unequal treatment of the citizens who live in a nation that follows Islamic principles of governance.

Jesus Christ said there is a difference between human government and God. Caesar was the official ruler of the Roman government, and Jesus said its taxes should be paid by his disciples.

Then Jesus said to them, “Give to Caesar what is Caesar’s and to God what is God’s.” And they were amazed at him. Mark 12:17 (NIV)

Furthermore, Jesus did not come to establish an earthly kingdom. So, Christians who follow his example are not a threat to a legitimate government that respects basic human rights. True Christianity does not have governmental or territorial aspirations. In fact, Jesus resisted the devil’s temptation to become a ruler of earthly kingdoms. By contrast, the Prophet of Islam and his disciples desired an earthy kingdom. And, after Muhammad’s death, Muslim crusaders spread Islam rapidly, by the power of the sword, across Egypt, Libya, Algeria, Persia, Iraq, Syria, Turkey, Spain, and Palestine.

Jesus said, “My kingdom is not of this world. If it were, my servants would fight to prevent my arrest by the Jews. But now my kingdom is from another place.” John 18:36 (NIV)

Again, the devil took him to a very high mountain and showed him all the kingdoms of the world and their splendor.
“All this I will give you,” he said, “if you will bow down and worship me.”
Jesus said to him, “Away from me, Satan! For it is written: ‘Worship the Lord your God, and serve him only.'” Matthew 4:8-10 (NIV)

The basic principles of Jesus’ spiritual kingdom were enunciated in his famous Sermon on the Mount. They show that his kingdom is a heavenly kingdom of mercy and peace.

The main message of Jesus is the gospel of salvation for sinners. The Lord Jesus Christ came to die upon Calvary’s cross where he paid the penalty for the sins of those who repent and believe in him. As incredible as it seems, it is the proclamation of God’s love in Jesus that elicits antagonism, controversy, and persecution. Muslims praise Jesus, but they ridicule His sacrificial death upon Calvary cross. Shari’a law considers it a crime of treason against an Islamic state when a Muslim believes the Injil of Jesus! Yet, it is an blessed message of peace and love to sinners who repent and accept Jesus as Savior.

“For God so loved the world that he gave his one and only Son, that whoever believes in him shall not perish but have eternal life. John 3:16 (NIV)